please sleep softly, leave me no room for doubt

June, how quickly you came and went…yet, you were quite the rollercoaster.  To those in the fields of healthcare provision, it is the end of the calendar year, so to speak, and for most, it is a period of transition between levels of training.  Similar to graduations from school/college/graduate school, it feels like continual waves washing over you — some of farewells and endings and some of aspirations of new beginnings.  There were lots of “see you later, not goodbye”s uttered and lots of “well, now what is next and when”s entertained.

The mindset / environment described above sets the stage for the music portion of my post.  Throughout the entire month, I found myself sifting through artists I had discovered over the past two years of training.  I listened to their albums in their entireties and reflected upon how I felt then and now when hearing their music and upon what life stressors were around then and what challenges are around now.  Also, as I wandered around physically and musically, I discovered new artists (foreshadowing for later posts) that really fit the bill in terms of that “yes, it’s summertime, and this is what summertime sounds like,” category to which, interestingly enough, I do not typically find myself drawn.  In coming across such “summer hits,” as I delved into their music, I realized that beneath electronic/dance mixes or remixes or covers of other artists, their other work was more in the same vein of music I typically enjoy.

Oh, but I digress.

It is difficult for me to choose just one artist/album to discuss who embodies the last month, but if I must, then it shall be Lianne La Havas.

Credit to Nonesuch for the above image from their article.

She is a singer, songwriter, guitarist, and pianist who hails from London, England, and though quite young, her voice has such depth — always rich and full of both sadness and hope — and seems much older and perhaps wiser than her age would let on.  Her work has been described as Engish folk and soul.  Her music and I go way back to the days of residency completion, mostly in terms of navigating through less-than-ideal relationships back then but also perhaps more importantly, punctuating the times between the formation of new relationships, both personal and professional, over the past two years.  I was first introduced to her music by a close friend who sent me the following song “Age” to cheer me up/make me laugh after the end of one of these less-than-ideal relationships.

I remember being stunned by the fullness and lilt of her voice in such a small, informal space.  This led to my subsequent binge listening of her album Is Your Love Big Enough?, of which “Elusive” (read: new relationship formations and their mysteries; I was surprised to note this is a cover of the original song by Scott Matthews and recommend the comparison of both versions) and “Everything Everything” (read:  inevitable metamorphoses and/or endings of relationships) have become some of my favorites.  “Gone” is a big heart-wrencher, if you’re in that kind of late-night angst.

While her music falls into my past, it also nicely has transitioned into my present and future listening as her new album Blood (can I stretch this into a healthcare reference?) will be released July 31st.  Her most recently released singles from this album — “Unstoppable” and “What You Don’t Do” — feel more upbeat than her last album; her sound is…rejuvenated, and I eagerly await the unveiling of the new album.  Lastly, the videos that accompany her songs are also refreshing and visually well done, particularly for “Elusive” and “Unstoppable.”

So…food item.  I have also celebrated my way through June with numerous meals and received a rather unique gift of Oreos in their various assortments for my edification as I was not aware that so many existed.  Anyway, with the same idea of a food item that represents past, present, and future, I will mention chicken adobo, Filipino style.  I say “mention” rather than “discuss” as I could (and probably should) write at least five blog entries to discuss my love for this dish, its numerous variations depending upon the part of the country, the nuances of said variations, and its rich history.  Briefly, I will just say that for me, it embodies the words “home” and “comfort food” (both in childhood and adulthood), for starters.  It is reminiscent of growing up and has remained a constant in my repertoire of dishes I enjoy cooking.  It is relatively straightforward to make and does not require too much…tending to, if you will, which made it a popular meal in college and during years of training when things were busy.

I cannot refer to a recipe that has been written down with exact measurements when I make it.  Thus, no two batches have ever tasted the same.  My version usually contains various combinations of white or dark meat with salt, pepper, ginger (and lots of it), soy sauce, vinegar (either distilled white or rice), sugar (white & brown), and on occasion, ketchup.  Sometimes, cinnamon will also be sprinkled.  It simmers over medium-heat for…a while, with a few turns.  I serve it up over white rice or brown rice and usually provide some sort of vegetable side dish (previously bok choy +/- shiitake mushrooms, stir fried). 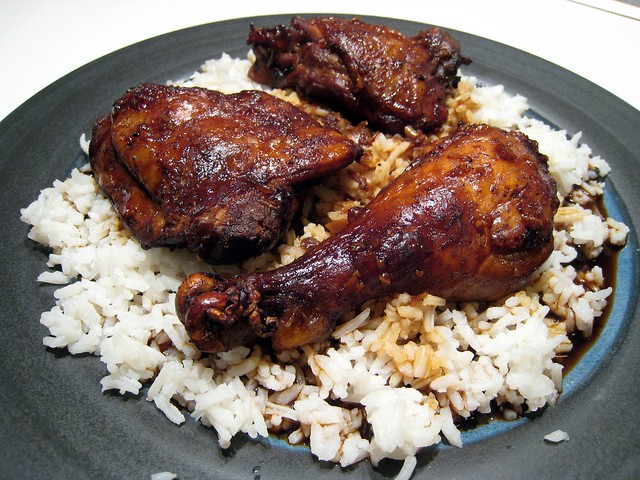 Credit to William Jones for the above image via Flickr.